Home VirtuCache How does Queue Depth affect latency and IOPS in VMware?

Even if you have a fast array and storage network, and you are still experiencing high storage latencies for your high throughput VMs, it might be because of choked Queue Depths at the VM and virtual LUN device in the host.

This problem will happen only if a few VMs generate most of the IOPS of the VMware cluster, and it is a high IOPS workload.

This post talks about how to diagnose this issue using Esxtop and how VirtuCache fixes it.

Queue Depth is assigned to a storage device (virtual or physical) by its developer / manufacturer.

The above Queue Depth equation results in the corollaries listed below:

In the below sections, I will explain the connection between Queue Depth, IO Depth, and VM Latency.

IO Depth is the count of IOs being actively processed or queued by a device.

Esxtop shows ACTV and QUED values only at the virtual LUN device level (run Esxtop and press u) and not at the Adapter level, which is sufficient, since Adapter level queues are rarely choked. 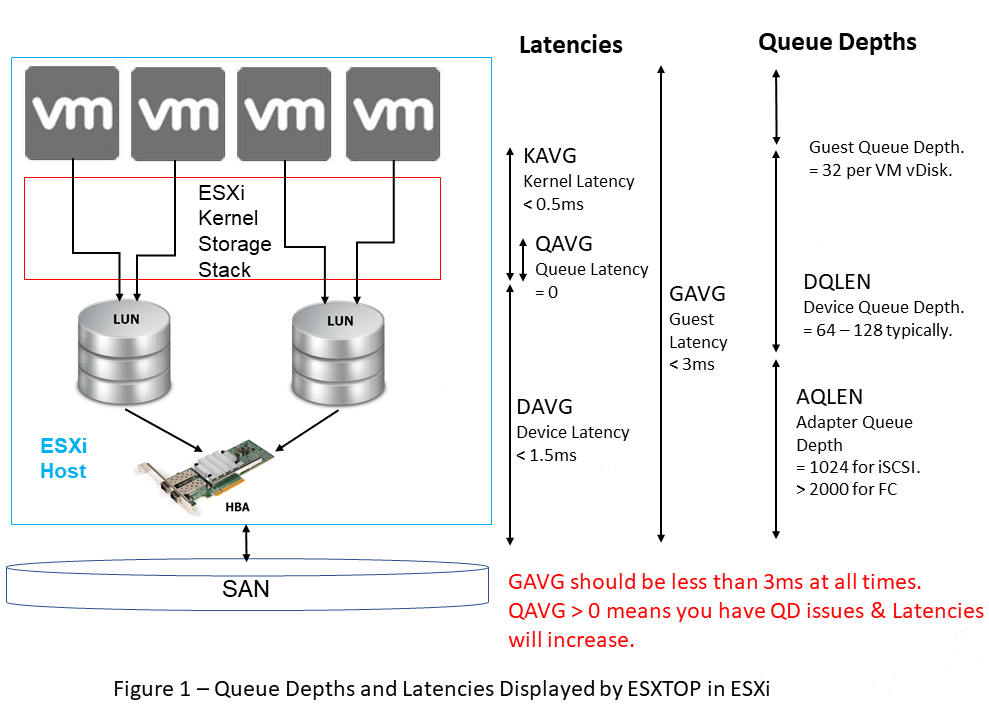 Below are two similar environments with the same number of VMs, Hosts, LUNs, and IOPS, and the same iSCSI SAN array and network. In the first example the Queue Depth is not choked, but in the second it is.

Environment 1 – No Queue Depth Issues If High IOPS are Spread Out Evenly Between VMs, Hosts, and LUNs.

Say each VM pushes 10 IO requests simultaneously (so IO depth of 10), and you have 30 VMs per host, so you are pushing 300 IO requests simultaneously through the iSCSI NIC out to the SAN. Since the Queue Depth for the iSCSI initiator is 1024, it can easily accommodate the IO depth of 300. Now say these 30 VMs are spread over 10 Datastores / LUNs, so each Host is pushing 30 IO requests (IO from 3 VMs) to each virtual LUN device. Since the Queue Depth of each virtual LUN device is 128, there is no bottleneck here as well. So, queue depths across the storage stack work quite well.

VMware was designed for a situation like this where the IO is well balanced across VMs, LUNs, and Hosts.

Environment 2 – Queue Depth Becomes An Issue When Only a Few VMs Generate most of the IOPS (‘Noisy Neighbor’ Problem).

Say you have 30 VMs per host, 29 of which have an IO depth of 2. And one that has an IO depth of 242. So, the total IO depth for all VMs on the host is still 300, but now you face Queue Depth related performance bottlenecks at two levels – Guest VM and Device. The VM has a Queue Depth of 32, so you will need to increase the Queue Depth of the VM by using the PVSCSI driver from VMware. This will let the entire workload with the IO depth of 242 go through the VM without any queuing.

You also want the high IOPS VM to be on its own LUN without sharing the LUN with other VMs. This prevents DSNRO from getting triggered, else the VM Queue Depth will get throttled further.

How VirtuCache Fixes The Noisy Neighbor Issue in VMware?

VirtuCache caches all reads and writes from VMware to an in-ESXi host NVME or RAM. NVME SSD and host RAM are very high queue depth (>2000). Since most of the reads are now served from host RAM or NVME, instead of the backend storage array, this would eliminate queuing issues on the virtual LUN device and it will free up the virtual LUN device Queue Depth to service writes.

VirtuCache caches all writes from VMware to the local NVME or RAM. It then flushes the write cache to the backend array continuously. So, it doesn’t reduce the volume of writes hitting the SAN array like it does for reads. However, when VirtuCache flushes the writes to backend array, it coalesces the writes, so it sends a smaller number of IOPS to the array than what VMware would have done without VirtuCache. So, the amount of data being written to the array remains the same, only it is transmitted in smaller number of IOs (smaller IO depth), thus reducing the IOPS hitting the array, which reduces the load on the array controller and reduces the queuing pressure on the virtual LUN device.

In addition to installing VirtuCache make sure of the below config in VMware.

Back when I founded Virtunet in 2010, VMware VSAN had started to effectively compete with SAN arrays. The appeal of hyperconverged infrastructure was obvious, getting rid of a separate storage appliance and having Flash memory right on the VMware host was the highest performing storage configuration. For a small 3-4…

If your SQL Server runs in a VMware VM and it has performance issues, the root cause of which is slow storage, then our host side caching software for VMware, called VirtuCache, will be able to fix this problem. This post explains how VirtuCache does this by explaining the read…

April 20, 2022; Connecticut, USA. WAN latency does not contribute to VM latencies when a storage array fails in a VMware metro / stretched cluster when all storage IO is cached to VMware host Flash or RAM. This post discusses how VirtuCache did this for Mashantucket casinos, by explaining the…

SYNOLOGY: CHEAP AND VMWARE READY Synology storage arrays have a few things going for them, they are one of the most reasonably priced storage arrays on the market that are also certified as ‘VMware Ready’ by VMware. HIGH LATENCIES IN SYNOLOGY WHEN CONNECTED TO VMWARE One issue with these appliances…

There are only a few applications, financial trading software being one example, that require very low latencies, lower even than what’s possible with an all-flash array (AFA). VirtuCache caching to in-host RAM results in lower VM latencies than an AFA. This is because RAM latencies are an order of magnitude…

By caching all writes from VMs to VMware host SSD or RAM, VirtuCache reduces write latency for VMs that are deployed in a VMware Metro / Stretched Storage Cluster (vMSC), and eliminates latency of the WAN link from factoring into VM latencies, thus improving the performance of VMs however slow…