• The throughput for the Linux physical server connected to Equal Logic appliance was 15MBps and latencies were at 14 ms.

• The same Oracle database was migrated to a Linux VM, on a host where the Equallogic storage was now accelerated by VirtuCache caching to a in-host Samsung 845 DC Pro. VM level throughput now was 120 MBps and latencies were under 5 ms.

By deploying VirtuCache in Dun & Bradstreet’s VMware environment, we demonstrated sub 10ms VM latencies for high, write-intensive, random storage IO, which in turn facilitated the P2V of their database servers.

D&B is in the business of managing and commercializing credit and other financial and corporate data about private and publicly listed companies in the US and Europe.

D&B’s IT staff wanted to virtualize their data intensive applications where possible, and without deteriorating application performance when these applications were P2Ved from their existing bare-metal physical Linux servers to VMware VMs.

D&B runs various financial and business analytics applications on underlying Oracle 11G databases. These applications ingest 10-12TB of new data every day and between 1 and 2 TB of reporting runs against 60TB of usable dataset every day. As result of such large amounts of ingest (write) and reporting (read) operations, D&B’s administrators were concerned that virtualizing these applications would put further pressure on their storage infrastructure for VMware, and as a result not only would these applications perform poorly in VMs, but that they will also negatively impact other VMs in the VMware cluster.

Step1: We ran Linux Top command as a cron job for two weeks to profile D&B’s bare-metal Oracle workload. This exercise provided us with read and write latencies and throughput data at the Linux OS level for two weeks.

Step 3: Before we migrated D&B’s Oracle workload from physical to virtual, we simulated this workload using Linux FIO utility within VMs, keeping the same VM density, transfer size, read/write mix, peak and average read and write throughput.  This was done to show D&B that VM level latencies were lower and the throughput higher when their workload would migrate from physical servers to VMs on VMware hosts that had VirtuCache running.

Step 4: Once D&B’s administrators were assured that the performance within VMs would far exceed the storage performance in their existing physical infrastructure, they P2Ved their Oracle VMs.

As you can see from the below charts, when VirtuCache accelerates the performance of underlying Dell Equallogic storage for the VMware host hosting the Linux VMs, the performance improvement versus when applications were running on bare-metal servers, is considerably higher at 4X improved throughput and 3X improved latencies. 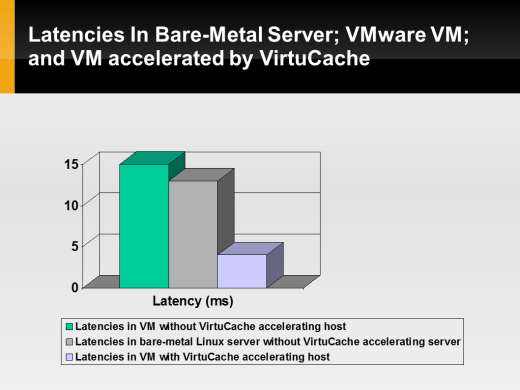 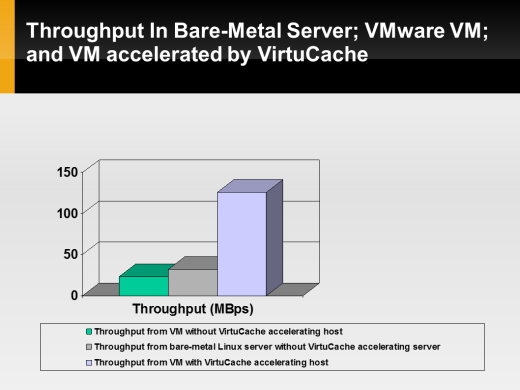 Improving Performance of Log Management Application at a Service Provider