If your SQL Server runs in a VMware VM and it has performance issues, the root cause of which is slow storage, then our host side caching software for VMware, called VirtuCache, will be able to fix this problem. This post explains how VirtuCache does this by explaining the read and write storage IO paths in SQL Server that factor into transaction times,  with and without VirtuCache.

N.B.You can assign large amounts of RAM to SQL server, however VM RAM assigned to SQL server doesn’t improve write performance since writes are committed in SQL Server only when the transaction log for those writes is flushed to persistent storage from VM RAM.

Step 1 above remains the same.

Step 3: Separately VirtuCache also intercepts flushing of data pages from SQL RAM to persistent storage, and caches these to cache media in the ESXi host in exactly the same way that VirtuCache does for transaction log records, thus speeding up the process of writing SQL data pages as well. However, transaction completion times in SQL Server are not affected by the write IO path of data pages. 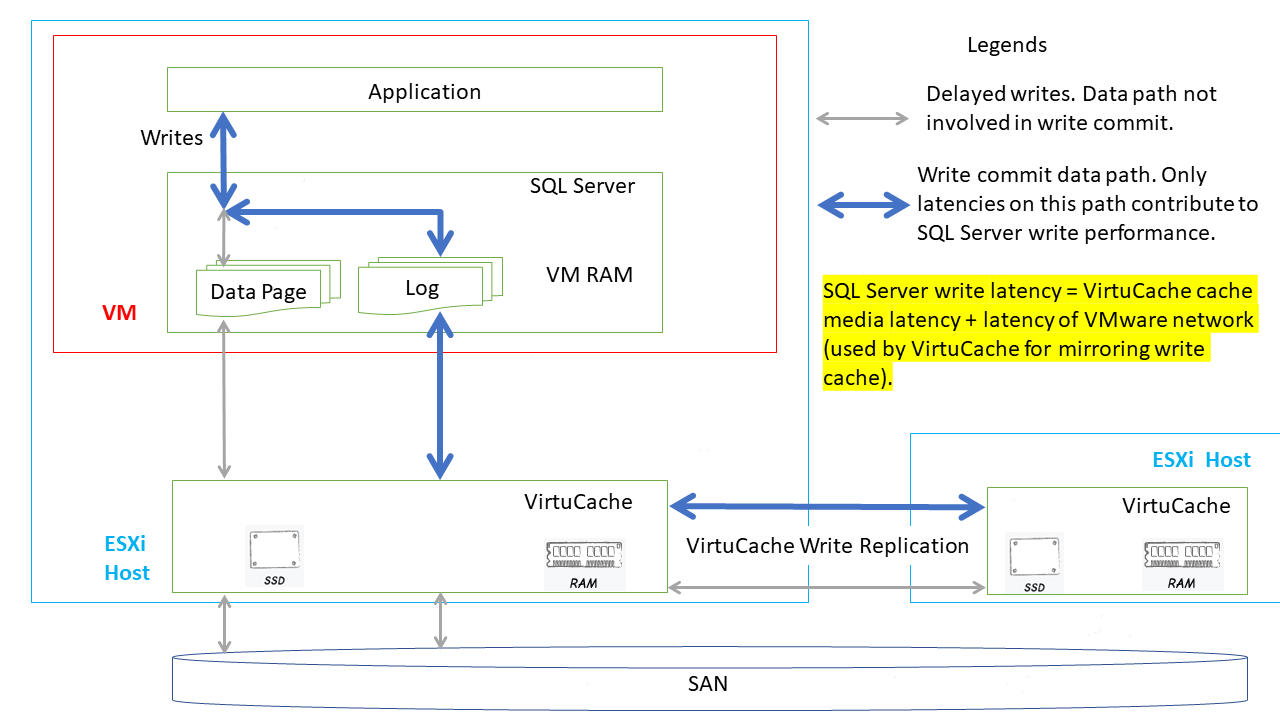 Reads in SQL Server retrieve data pages from VM memory assigned to SQL Server. If the pages are not in memory, SQL Server first retrieves those pages from persistent storage, so, if your backend storage is slow, then these reads will be slow.

Also, slow writes will reduce the performance of reads. Since reads and writes are interspersed on the same thread, if writes are slow then the reads behind these writes on the same thread will be slow as well, even though these reads will most likely be serviced from VM RAM when they get to the front of the queue. 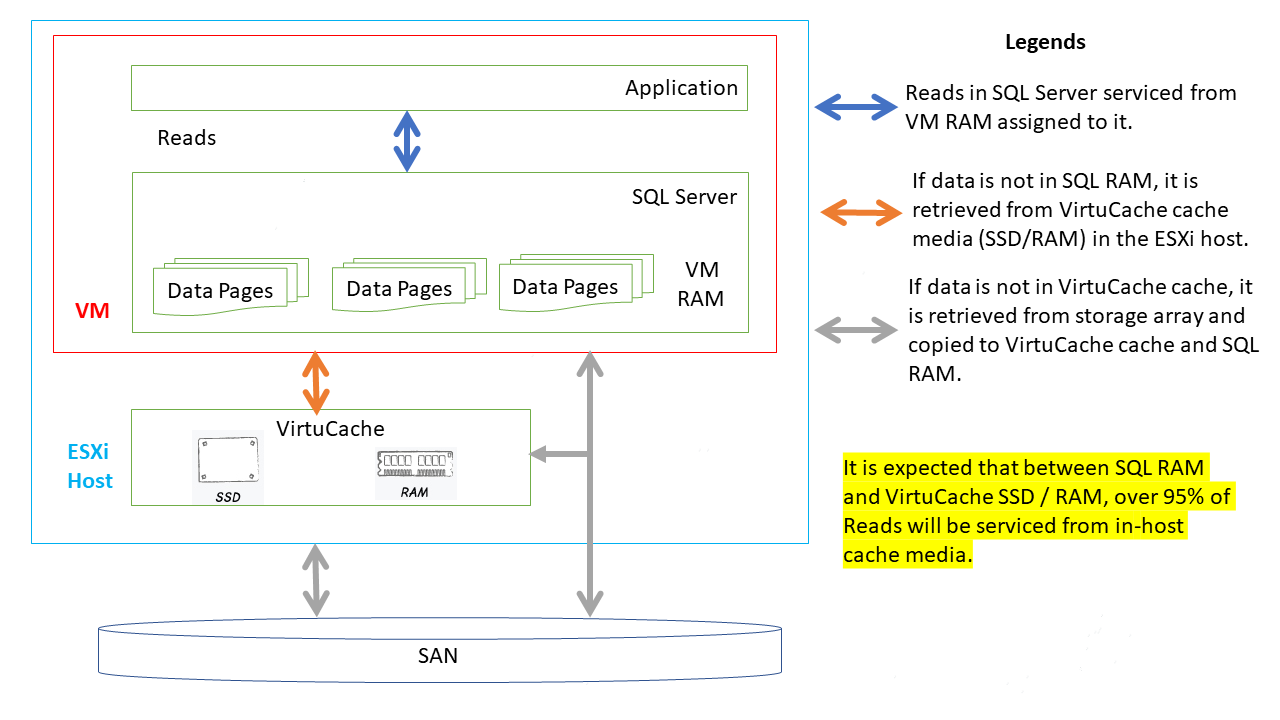 Cross References:
1 This Microsoft link says this – “SQL Server assembles transaction log records in a buffer, and flushes them out to durable media during commit processing. SQL will not complete the commit until the commit log record is durably stored on media. This hard flush can delay processing in very high transaction rate (low latency) systems.”
2 This link says “workloads that involve lots of small transactions, like OLTP workloads, can potentially experience log-write-related bottlenecks.”

How to improve disk write latency in VMware?

SYNOLOGY: CHEAP AND VMWARE READY Synology storage arrays have a few things going for them, they are one of the most reasonably priced storage arrays on the market that are also certified as ‘VMware Ready’ by VMware. HIGH LATENCIES IN SYNOLOGY WHEN CONNECTED TO VMWARE One issue with these appliances…

Back when I founded Virtunet in 2010, VMware VSAN had started to effectively compete with SAN arrays. The appeal of hyperconverged infrastructure was obvious, getting rid of a separate storage appliance and having Flash memory right on the VMware host was the highest performing storage configuration. For a small 3-4…

27 Feb 2020
How to Select SSDs for Host Side Caching for VMware — Interface, Model, Size, Source and Raid Level ?

In terms of price/performance, enterprise NVME SSDs have now become the best choice for in-VMware host caching media. They are higher performing and cost just a little more than their lower performing SATA counterparts. The Samsung PM1735 (in PCIe form factor) and the Intel P4610 (2.5″ U.2 form factor) NVME…

The specific NVME SSDs I recommend are the Samsung PM1735, for a conventional PCIe slot in the VMware host, and the Intel P4610 for a 15mm U.2 slot in the host. NVME SSDs are by far the best choice for host side caching in VMware. They are the same price…

Beefing up Buffer Cache size in Oracle Database alone may not solve all your slow database issues. If your Oracle Database runs in a VMware VM and it has performance issues due to heavy insert and/or update load, the root cause of which is slow storage, then our host side…

25 May 2022
How does Queue Depth affect latency and IOPS in VMware?

Even if you have a fast array and storage network, and you are still experiencing high storage latencies for your high throughput VMs, it might be because of choked Queue Depths at the VM and virtual LUN device in the host. This problem will happen only if a few VMs…