Dell’s PowerEdge VRTX hyper-converged appliance can either have all hard drive datastores or all SSD datastores, but you can’t have SSDs or RAM act as tiering or caching media for VRTX volumes / virtual disks. That’s where VirtuCache comes in.

VirtuCache is kernel-mode software that you install in VMware vSphere, that automatically caches frequently and recently used data, both reads and writes, from Datastores on VRTX shared storage to any SSD (or host RAM) in VRTX. By doing so, VirtuCache improves the performance of shared VRTX storage.

VirtuCache deployment is seamless, in the sense that applications or end users don’t realize that most of the data is now read from and always first written to the in-host cache media, instead of shared storage. Deploying VirtuCache doesn’t require any storage, network, or host reconfiguration.

It’s extremely easy to deploy and manage. You can choose to evaluate VirtuCache by registering for VirtuCache download here.

Click here for technical details around how VirtuCache caches reads and writes; syncs writes to shared storage; and protects against data loss in case of host failure.

There are three options for cache media in VRTX to be used with VirtuCache.

VIrtuCache would compete with a new All-Flash array or replacing all HDDs in the VRTX chassis with SAS SSDs. Below are the costs for all three options, assuming that you have a 4-node VRTX and 80TB usable storage.

* We are assuming that in the case of VirtuCache, 10-20% of cache media suffices to service almost all storage IO (reads and writes) from in-host cache media, hence 12.8TB of NVME SSD is sufficient for 80TB of usable storage. 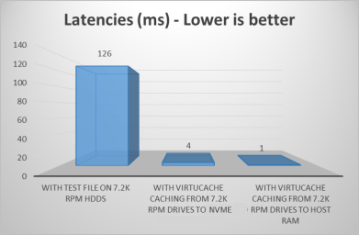 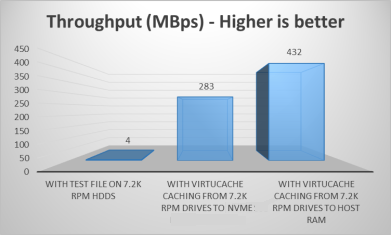