Listed below are the specific criteria that Seagate was looking for in a software solution.

Below is a point-by-point summary of how Virtunet Systems’ VirtuCache Server Side Caching Software was able to satisfy each of Seagate’s requirements.

VirtuCache is a kernel mode driver only, and so it provides closest to raw throughput and latencies versus rest of the server side caching vendors that are VM based. The way Seagate tested this was by first base lining raw throughput and latencies using IOmeter tests on a VM whose VMDK was on the SSD. Then the same IOmeter tests were run, with the VMDK now on a LUN on a hard disk based EMC storage appliance and VirtuCache caching the LUN data to the SSD.

Below are the results of those tests.

These tests proved that VirtuCache deteriorated raw SSD throughput and latency by no more than 5%, provided of course that the cache hit ratio was high.

The ability to increase the number of VMs on an ESXi host is a direct benefit of reduced storage latencies.

To test for increased VM densities, Seagate ran a well defined 80% read and 20% write workload that did about 200 IOPS from within a Windows 7 virtual desktop VM.

As shown below, the number of VMs quadrupled..

At 80 VMs, the bottleneck had now shifted from storage IO to the 48GB Server DRAM. 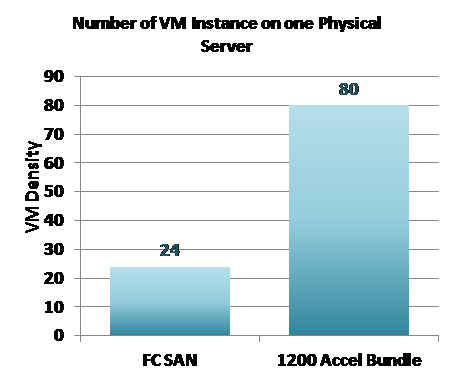 1200 Accelerator Bundle – Seagate 12gbps Pulsar SAS SSD with VirtuCache software. FC SAN – When the VMDKs were on LUNs on a Clariion CX3-10 without any SSD boost.

In the words of Rich Vignes, Director of Enterprise SSD Product Management, “VirtuCache is arguably the best caching solution on the market optimized for VMware environment. There are many things which make VirtuCache better than other products in the market, but here are just a few.   First, VirtuCache is a hypervisor kernel based implementation, making all caching decisions within the VMware kernel AND without modifying the native VMware kernel. This is unlike competitive approaches that utilize agent software that must be loaded into each Guest VM, or others that modify the native VMware kernel. Second, VirtuCache only caches one copy of the IO block, even if that block is being called by many VMs at different times. Third, in the case of linked clones, where many linked clones use the same parent image, Virtunet ensures that parent image are cached only once. In comparison, some of the other server side caching vendors copy the parent image to the local SSD as many times as there are linked clones created from the same parent image, thus filling up the SSD with large amounts of redundant data.  These last two features are especially useful for VDI which has a large percentage of duplicate data.  Fourth, VirtuCache fully supports VMware features – vMotion, High Availability, Failover, DRS, Snapshots, storage vendor supported Multi-Pathing, or native VMware Multi-Pathing, X-vMotion and storage vMotion.”

The Seagate 1200 Accelerator for VMware that bundles VirtuCache with Seagate’s 12gbps SAS SSD is an outstanding, cost effective way to increase the performance and scalability of enterprise VMware environments, at a fraction of the cost of high-end enterprise SAN equipment, more expensive PCIe Flash products, or All-Flash arrays.  The Seagate 1200 Accelerator improves VM response times and increases the VM to host ratio.